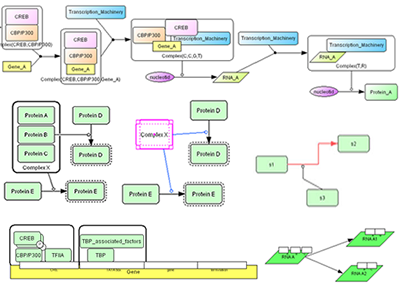 Version 3.0 implements most part of notations described in Kitano, et al., "Using process diagram for the graphical representation of biological networks," Nature Biotechnology, August 2005.
Samples:
*The examples in the above paper are included as the sample files and many more.

Note: For those who have been using CellDesigner 2.X
The function to create or to release heteromultimers has been replaced by more general form of complex formation. By "complex" you will get boundary of the complex and you can either put proteins or take out protein. (See the middle section of the example on the right)

The “Control Panel”, introduced in CellDesigner Version 2.5, is designed to assist the users to simulate directly from CellDesigner controlling the amounts and parameters of the Species.